(DailyMail) The first witness to give evidence in the Ghislaine Maxwell trial for sex trafficking has said he believes her relationship with Jeffrey Epstein was ‘more personal than business’.

Larry Visoski was Epstein’s chief pilot and flew the pedophile financier for more than 25 years.

Asked what he had made of Epstein’s relationship to Ghislaine Maxwell, he said it was ‘more personal than business’, but added: ‘I wouldn’t characterize it as romantic.’

Visoski said he had been hired in 1991 and had flown Epstein around roughly ‘every four days’. The pilot was so close to his boss that his daughter was reportedly married at Epstein’s New Mexico ranch. 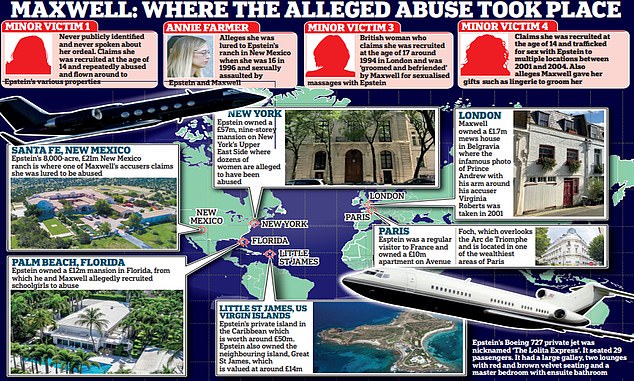 The pilot captained Epstein’s Boeing 727 jet – known infamously as the ‘Lolita Express’ – just one of several private aircraft which prosecutors believe was used to shuttle underage girls between Epstein’s residences in New York and Palm Beach.

Visoski described the interior of Epstein’s New York mansion in detail, as photos of the properties around the world where abuse is alleged to have taken place were displayed for the jury.

Epstein used his private jet – nicknamed the Lolita Express because of some of the alleged underage passengers – to fly himself, high-powered friends, including Bill Clinton, and a parade of young women.

Last year, it emerged flight logs for all of Epstein’s private aircraft had been subpoenaed, sparking fears among celebrities who had partied with the pedophile.

The attorney general in the Virgin Islands where he owned a private island has reportedly demanded to see the logs.

Victims have since claimed Epstein had a large bed installed on the jet where guests had group sex with young girls, fulfilling their warped fantasies.

In 2015, victim Virginia Giuffre Roberts filed a lawsuit against the billionaire, claiming he recruited her as a ‘sex slave’ at the age of 15, sexually abusing her for years on his private jet as well as his various homes in New York, New Mexico, Florida, and the US Virgin Islands.

A 2019 report claimed court filings showed that Epstein sold the Lolita Express weeks before his arrest on July 6 that year.

Visoski’s testimony was given on the first day of Ghislaine Maxwell’s trial on sex trafficking charges in Manhattan’s Federal Court House yesterday.

The British socialite was Epstein’s ‘second in command’ and lured vulnerable teenagers for him to assault, a jury in New York heard.

The courtroom was packed as Maxwell’s trial on sex trafficking charges got under way, with observers queuing in the freezing cold from 5am to guarantee a seat. They were silent throughout as lurid claims against Epstein’s alleged madam were aired.

Maxwell herself listened intently throughout the first day of the trial, occasionally scribbling in a notebook and turning to look at her sister, as Assistant US Attorney Lara Pomerantz accused her of ‘heinous crimes’.

The prosecutor warned the jury that some of the evidence they will hear over the course of the six-week trial may make them uncomfortable.

But, after hearing it, she added, they would ‘reach the only verdict possible – that Ghislaine Maxwell is guilty’.

Miss Pomerantz accused Maxwell of being one half of a powerful couple with Epstein, devising a sick ‘pyramid scheme of abuse’.