The parents of accused Michigan school shooter Ethan Crumbley are being hunted by state and federal authorities after going on the run, just hours after a prosecutor announced involuntary manslaughter charges against them and revealed stunning details about the murder weapon that was a Christmas gift for the 15-year-old, whom police say shot dead four students after penning a disturbing note saying ‘thoughts won’t stop, help me.’

Police have issued a ‘be on the lookout alert’ and dispatched fugitive apprehension teams to search for James and Jennifer Crumbley, who were charged Friday with four counts of involuntary manslaughter in connection with Tuesday’s deadly shooting and have until 4pm to turn themselves in. The charges carry a sentence of up to 15 years in prison.

Oakland County Sheriff Michael Bouchard said he learned of the charges being filed against the Crumbleys from media reports and had no advance warning from the prosecutors, which he said would have allowed his agency to secure the suspects.

He told CNN police were searching for the Crumbleys after the couple’s attorney told his office that the Crumbleys stopped responding to messages.

‘If they think they’re going to get away, they’re not,’ Bouchard said, adding that a ‘host’ of detectives, as well as the FBI and the U.S. Marshals Service, were looking for them.

The Crumbleys attorneys, Shannon Smith and Mariell Lehman, however, insisted that their clients were not on the lam.

‘On Thursday night we contacted the Oakland County prosecutor to discuss this matter and to advise her that James and Jennifer Crumbley would be turning themselves in to be arraigned,’ the lawyers said in a statement obtained by DailyMail.com. ‘Instead of communicating with us, the prosecutor held a press conference to announce charges.

‘The Crumbleys left town on the night of the tragic shooting for their own safety. They are returning to the area to be arraigned. They are not fleeing from law enforcement despite recent comments in media reports.’

Smith and Lehman didn’t say when they would appear in court. 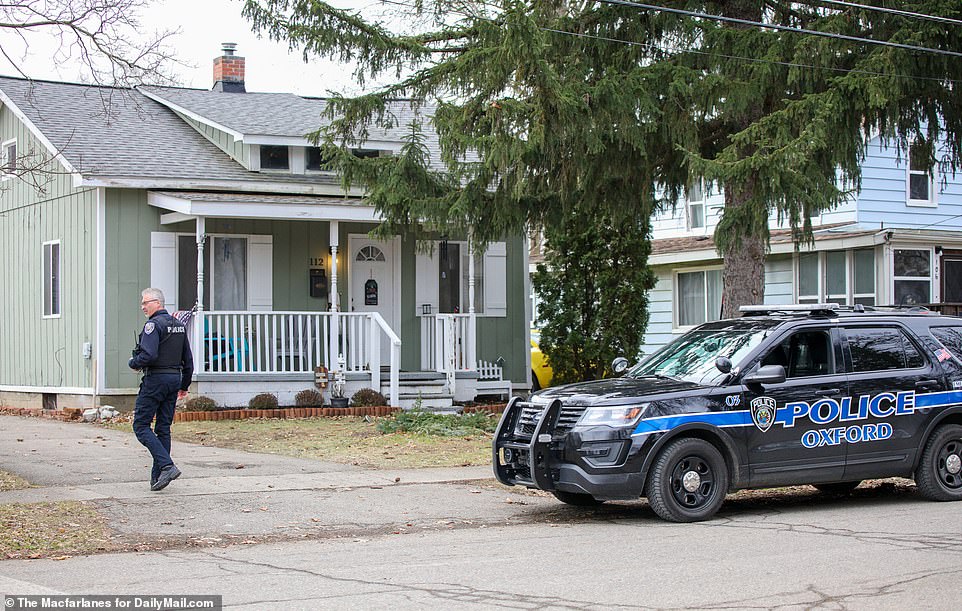 Oakland County prosecutor Karen McDonald alleged that the parents ignored multiple warning signs and refused to take their son out of school just hours before the shooting took place.

Jennifer bragged on social media about going out with Ethan to test his Christmas present – a 9mm handgun – just three days before the shooting at Oxford High School, and just one day after her husband James had purchased the gun for Ethan.

During a press conference Friday, McDonald revealed stunning new details leading up to the shooting that took place Tuesday afternoon, including that Jennifer texted her son about 30 minutes after the rampage saying, ‘Ethan, don’t do it,’ and that her husband James called 911 to report that his gun – a 9 mm Sig Sauer SP 2022 – was missing and that Ethan was likely the shooter.

The prosecutor revealed that James, who – like his wife – had a prior criminal history, bought the murder weapon from a retailer with his son there on November 26. He stored the 9mm handgun in an unlocked drawer in his bedroom, McDonald said.

The next day, Jennifer posted about the Christmas present to Instagram with the caption: ‘Mom & son day testing out his new Xmas [sic] present.’ Jennifer’s Instagram account has since been taken down.

Two days later, on November 29, McDonald said a teacher at Oxford High School observed Ethan searching ammunition on his cell during class and reported it to school officials.

Ethan had a meeting with school administrators, and his mother Jennifer was contacted via voicemail by the school about her son’s inappropriate internet search. Officials also followed up with an email but received no response, the prosecutor said.

The mother later exchanged texts with her son on that day stating: ‘lol, I’m not mad at you, you have to learn not to get caught,’ McDonald said Friday.

She also revealed that on the morning of the shooting, a teacher found a chilling note on Ethan’s desk, which featured disturbing drawings depicting a semi-automatic gun, a bullet, a shooting victim and a laughing emoji.

According to the prosecutor, the note included the words ‘blood everywhere,’ ‘thoughts won’t stop, help me,’ ‘my life is useless’ and ‘the world is dead.’

Jennifer and James were immediately summoned to the school to discuss their son’s worrying behavior. A school counselor was able to obtain the note with the drawings, but McDonald said by then its contents had been ‘altered.’

The doodles of the gun and the bullet-ridden figure were ‘scratched out,’ as well as Ethan’s writings.

During the meeting, the Crumbleys were shown the note and were advised that they were required to get Ethan into counselling within 48 hours.

According to the prosecutor, the mother and father failed to ask Ethan if he had his gun with him, or where his gun was, and did not inspect his backpack.

McDonald said the parents ‘resisted’ the idea of pulling their son out of school at that time and left without him.

Officials previously said that at 12.51pm, Ethan walked into a bathroom at Oakland High School with a backpack, then emerged less than a minute later carrying the Sig Sauer handgun and opened fire.

At 1.22pm – more than 30 minutes after the shooting was first reported – Jennifer texted her son, saying: ‘Ethan, don’t do it,’ the prosecutor said.

At 1.37pm, James called 911, reporting his newly purchased gun missing. He also told an emergency dispatcher that he believed his son might be the shooter at Oxford High School.

James and Jennifer were scheduled to be arraigned at 4pm, but authorities reported the pair were not in custody as of late Friday afternoon.

Charging documents allege that the parents caused the death of each of the four deceased victims by ‘storing his or her firearm and its ammunition so as to allow access to the firearm and ammunition by his or her minor child or the grossly negligent failure… to exercise reasonable care to control his or her minor child so as to prevent him from intentionally harming others or from so conducting himself so as to create an unreasonable risk of bodily harm to others knowing that he or she has the ability to control his or her child and knowing of the necessity and opportunity to do so.’