A fellow actor, Adam Baldwin (no relation) wasted no time giving his vocal opinion of the Hollywood star’s latest prime time interview where he attempted to do damage-control for the killing of a cinematographer Halyna Hutchins. The bizarre interview only made things worse he he blamed the victim for directing him to shoot her.

Alec Baldwin told ABC’s George Stephanopolous that he didn’t pull the trigger that fired the fatal round, but Adam Baldwin says he “confessed” to doing everything wrong.

Adam Baldwin remembers firing a similar gun on the set of the movie Wyatt Earp in the depiction of the gunfight at the O.K. Corral.

He knows exactly what Alec Baldwin did wrong on the set of Rust, as he told me on Seattle talk station KTTH.

I’ve handled several types of revolvers in my experience and in Wyatt Earp I had basically the same weapon, so I’m very familiar with this as a prop gun. I fired it in the depiction of the gunfight at the OK Corral, so I know exactly – we shot that right outside Santa Fe. We used that same ranch. I’ve been there. That and the Cook Ranch were used for locations for Wyatt Earp when we shot that so I know exactly what I’m talking about with this.

The two Baldwins share the same last name, and maybe ancestors from hundreds of years ago, but that’s one of the very few things they have in common: that and their mutual love of movie-making.

Adam Baldwin has been part of some of Hollywood’s most iconic movies and TV shows. He acted in Full Metal Jacket, Independence Day, Men in Black, Firefly, “NCIS,” and “Chuck,” and his voice is featured in some of the biggest video games in the business. He just wrapped a movie about the life of retired NFL quarterback Kurt Warner called American Underdog.

He knows his way around a movie set.

And he also knows gun rules. Alec Baldwin has big problems, Adam says, because “he can’t claim ignorance of the law or the safety regulations because ignorance is no excuse.” 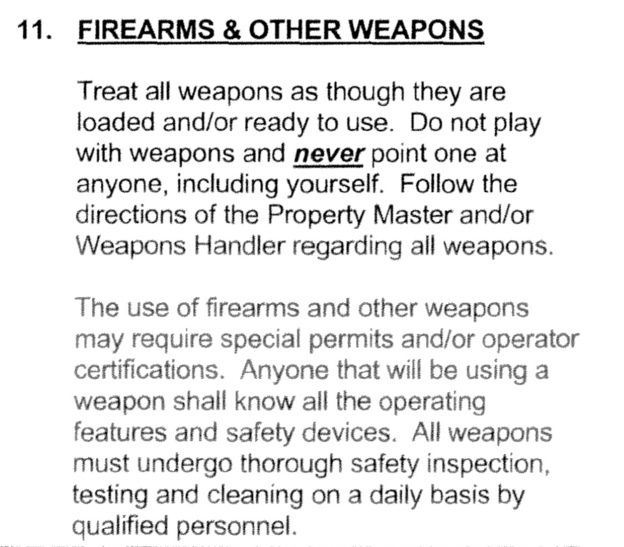 He’s tired of Alec Baldwin deflecting blame to others as he did when he first blamed the armorer and tried to “Monica Lewinsky her,” as if former Bill Clinton communications guy James Carville was running his PR team. “I thought that James Carville was behind the scene there, doing damage control. They tried to drag this poor armorer through the mud [switches to Carville impression] ‘like drag a dollar bill through the trailer park and you gonna see what choo gon’ get.’ It was disgusting.”

Then, in Alec’s interview with the other former Bill Clinton PR guy, ABC’s George Stephanopolous, he tried to blame the cinematographer — the victim. His victim-blaming was “sickeningly” transparent.

“It’s blame-shifting,” Adam Baldwin said, “you’re not supposed to mishandle the weapon. It’s a shame that Alec violated the protocols. … He’s in deep denial and he can’t claim ignorance of the law or the safety regulations, because ignorance is no excuse,” he told me. Worse, not only should he have known what to do with the gun, he did know.

[S]afety protocols are so very important and that’s why they’re drilled into – in fact, they’re required – you’re required to take safety training when you’re cast in a show like this.

[…] SAG AFTRA says “anyone using a weapon SHALL know all the operating features and safety devices. This is black letter.

He read me the SAG/AFTRA rules on the use of the guns on set and then assessed what Alec Baldwin did with the vintage prop gun, which was similar to the one he handled on the set of Wyatt Earp.

… He pulled it … he aimed it. He pulled the hammer back and the hammer has four clicks when you pull the hammer back. The first click is quarter cock. The second click is half-cock. The third click is three-quarter and the final click is four cock. So, each of those positions doesn’t allow the hammer to drop on the round in the chamber on the primer; the firing pin won’t hit the primer when it’s set in that cocked position.

Unless you depress the trigger.

The film’s assistant director claims that Alec Baldwin didn’t pull the trigger, either. But it may not matter much. The actor’s interview may have been catastrophic for the future criminal and civil liability claims coming his way.

As I thanked him for his time, Adam Baldwin added, “Thanks, Victoria. Yeah, he confessed.”